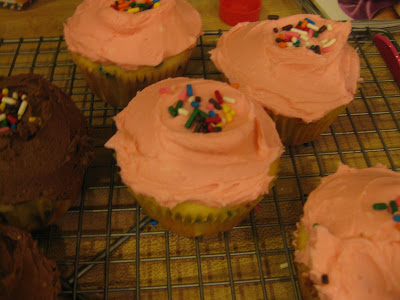 Funfetti Cupcakes with pink vanilla buttercream and chocolate buttercream.
Wow it has been awhile. I have been seriously absent from blogging, which I'd like to blame on a couple of things: work, school, and wedding planning. But I'm not one for excuses, so I will just say it's good to be back.
I think it is rather appropriate that my first entry after quite some time involves cupcakes. I have posted a number of cupcake-related entries. Magnolia, Sprinkles, and Georgetown Cupcake brought about a cupcake resurrection as it were - making cupcakes not just for kids, but for adults too. For awhile it seemed that cupcakes were all the rage, you couldn't go anywhere without some bakery or restaurant peddling their version of the cupcake. I don't know about you, but for a little while I was "cupcaked out." But in recent months I've found myself looking at cupcakes with fresh eyes and a fresh tummy. There's a reason cupcakes are popular - they're individual sized, cute, and when done well they're just the right amount of fat and sugar to send you on a dessert high. 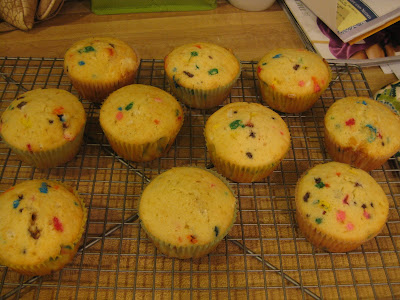 Fresh from the oven - those sprinkles sure are pretty!
If you think it's been awhile since I blogged, it has been even longer since I baked a cupcake (perhaps AJ's last birthday?) But with another birthday on the horizon I felt inspired to make cupcakes. I thought about doing something traditional (red velvet) or maybe something gourmet (mexican chocolate), but decided to just go with fun (fun-fetti that is)! I had never made a funfetti cupcake from scratch. I think most of us have just resorted to the Pillsbury box cupcakes. But a birthday for someone as special as AJ deserves homemade (I know I'm a snob). 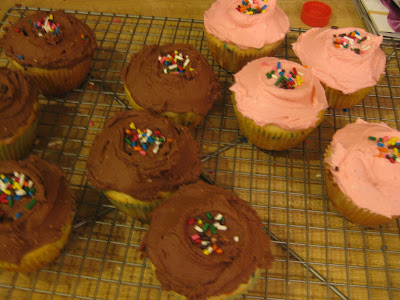 I think I managed to get frosting and sprinkles all over my clothes.
AJ loves chocolate so I knew I would do a chocolate frosting. But to me funfetti cupcakes need pink frosting. My friend Kim used to make funfetti cupcakes all the time in high school and they were awesome. And guess what she always had pink frosting! So, I divided the frosting in half and added unsweetened chocolate to one half and red dye to the other. 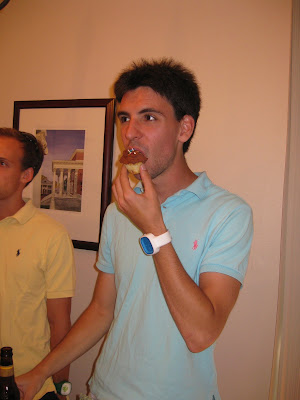 Birthday Boy!
The funfetti cupcake recipe was from a blog called Sweet Tooth, which is rather appropriate. I substituted cake flour for AP flour (just add an extra 2 tbsps for every 1 cup). In her recipe she forgets to tell you where the milk should go. My mother taught me well, so I remembered that you alternate flour and milk, beginning and ending with flour.
The cupcakes turned out well and were a hit at our bbq. I think the cake was a lil dry, but overall these were a lot of fun to make and eat. The chocolate frosting was pretty awesome (go Joy of Baking), I ended up eating the cold leftovers out of the bowl the next day. Almost like a quick fudge. NOMS. Happy Birthday AJ, Jenny, Natalie, Cammy, and Mom - love to my September favs! 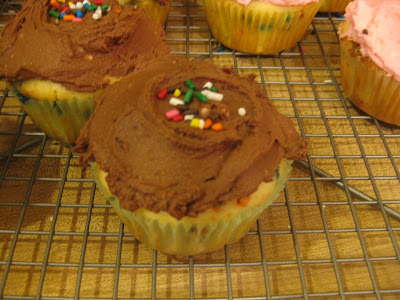 Indulge your inner child - make some funfetti cupcakes.
Posted by Ariel at 10:48 PM

Thanks for the great post. Those who come to read your article will find lots of helpful and informative tips.

Awesome article. Thanks for sharing lots of information. Its very helpful to me.

Thanks For Sharing The Information

How adorable are those! I love the idea, my Sister In Law is expecting a little boy this November, and I think these might be a great addition to her baby shower! Thanks! 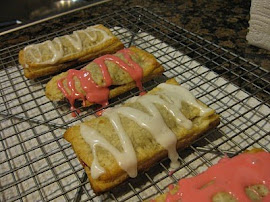